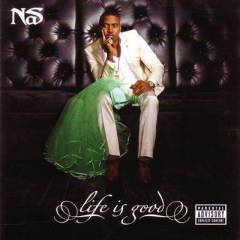 Nas was the king of the streets after his debut album Illmatic hit the shelves in 1994. The album is known for his conscious and thoughtful look at black America, his expansive vocabulary/lyrical ability, and a knack for storytelling that is rarely duplicated. The New York MC has had plenty of success over the past 20 years.  However, the 2008 release of his untitled album, his most controversial and political work to date, prompted fans and critics alike to wonder if he had lost some of his luster. Nas seemed more disconnected with his music than ever before.  After a four year absence from the hip-hop spotlight, Nas has finally returned to full strength on Life Is Good, which displays a touch of his political views mixed with heartfelt personal experiences where Nas reflects the past while living in the present over beats that flawlessly fuse modern pop and 90’s hip-hop.

Life is Good’s superior production value and artistic diversity is evident upon the first listen.  The album’s opening seconds feature a string quartet accompanied by a piano.  Throughout the track list, orchestral strings and brass, classical piano, long vocal choruses, and extended instrumental interludes are all mixed with the standard pallet of sound found in most hip-hop music.  Jazz elements are heard on the two songs about Nas’s new adult relationships, “Stay” and “Cherry Wine,” which features the late Amy Winehouse in the chorus.  Even the album’s most repetitive track, “The Don,” displays a high attention to artistic detail.  Each reiteration of the beat subtly adds a new element, whether it’s an alteration in rhythm, the inclusion/exclusion of bass, echoes in the voice, or layers of effects in the background, making a seemingly simple beat extremely complex.

Life Is Good contains two of the year’s best songs, “Loco-Motive” and “Reach Out.”  On “Loco-Motive,” Nas takes a ride on a subway back in time with some help from producer No I.D., who’s old school beats are “trapped in the 90’s” like a lot of hip-hop’s most dedicated fans.  The song’s lyric, “My life been good since I started finding peace,” reflects on both the peace he found after leaving the streets of New York and after his recent divorce with his ex-wife Kelis.  Both are recurring themes throughout Life Is Good, as are coping with fame, being a parent and returning to some of the hip-hop ideals of the 90s.  “Reach Out,” featuring Mary J. Blige, stylistically parallels Nas’s 1996 anthem, “If I Ruled The World (Imagine That),” with a simple drumbeat, soft piano during the verses, and a soul-styled hook.

The song “Accident Murderer” is a tribute to the innocent bystanders who have been victims of gang violence.  Although the track isn’t as personal, Nas has a vendetta against gang life for idolized gun use and for valuing street cred.

Hip-Hop has changed a lot in the near 20 years since Nas released Illmatic, and Nas has finally rediscovered his place in the genre.  While avoiding modern gimmicks like auto-tune, dance beats and overused lyrical content, he’s able to create a mainstream album that’s still true to himself.  Nas doesn’t claim to spend his time drinking, doing drugs, and hooking up with woman like everyone else in the rap game today.  He tells it how it is; he’s a 40 year old, recently divorced father with tax problems, has a teenaged daughter, a longing for the 90’s and a love for hip-hop.  Among the chaos of everyday living, his life is still good.