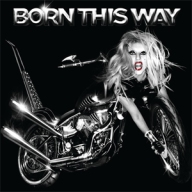 On Lady Gaga’s sophomore effort, Born This Way, listeners got a lot more of the same.  Born This Way is track after track of catchy dance floor hits, but if you were hoping to find more variety than her debut album The Fame offered, then you’ll be disappointed.  The album lacks musical originality, and is just another extension of the electronic anthems she has released over the last two years.

“Highway Unicorn (Road to Love)’s” opening and main hook bear a striking resemblance to the chorus of her song “Poker Face,” and its bridge and verses sound like a reincarnation of “Bad Romance.”  The German lyrics in “Scheiße” are an interesting touch, but are only there to mask the fact that it has been done before.  Lady Gaga tries to change the pace of the album with dance tracks “Electric Chapel,” “Bad Kids” and “Hair” that strive to be 80’s rock anthems, driven by piano and guitar.  However, it’s the same technique that was used on The Fame to give the illusion of change.  Each song uses a lot of repetition in its lyrics, especially its chorus, making everything seem just a little forced and in some cases a bit dull.  The metaphors and references to Jesus, Judas and crucifixions powdered throughout the album seem out of place on dance tracks focusing on sex, partying and being an individual.  Mix them in with the about 1,000 times she or others are heard chanting  “Gaga” on the songs shows that she is getting a little power crazy.

Born This Way might not be anything too original or innovative, but it still has some good tracks, and there are hints of new things that weren’t present before.  The Bruce Springsteen styled saxophone on “Hair” and the single “The Edge of Glory” is a fun inclusion to the dance songs.  And opposed to darker songs that make up most of her catalogue, “Hair,” “…Glory” and the title track’s more inspirational tones and lyrics are refreshing.  “Heavy Metal Lover” is a dub step song, and the elements of the genre are another fresh sound that gets mixed sporadically on the album.

There are two tracks that are a bit out of the ordinary.  The electronic elements get hidden behind real instruments, which makes the songs sound more authentic.  The first is “Bloody Mary,” a slower paced dance track that’s mellower singing style and string section makes it the album’s biggest highlight. On “You and I” Lady Gaga tackles rock music head on.  The Queen style guitar solo and drums layered on top of Gaga’s piano playing is a welcome contrast to the rest of the album.

Lady Gaga seems to have perfected the electronic pop genre by implementing elements found in other musical styles.  However, because of the one-dimensional nature of the genre, and the album, it’s hard to imagine that it will excel much further than it has.  With other artists like Katy Perry, Britney Spears and Ke$ha imitating her sound, radio listeners should soon overdose on the style.  So what will the new “Queen of Pop” do next?  Will she risk changing her style, or will she continue to make more of the same and risk becoming obsolete?  What we do know is that Lady Gaga will enjoy her time at the top, whether it last a week,  another year or a lot longer.