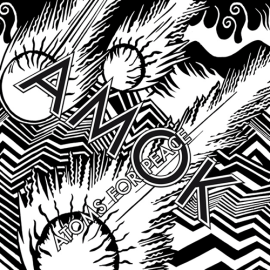 An electronic, loop-based 45 minutes makes Atoms For Peace’s debut Amok the most predictable album associated with Thom Yorke to date, with computer generated sound effects, interesting harmonies, a lot of moaning, sporadic guitar, and a bass that constantly fluctuates between MIDI and the real thing.  The drum loops and synths all begin to blend together half way through, making Amok repetitive and dull at times.  The majority of tracks start with a drowning synth playing a simple progression of individual notes, which can sound like children messing around with production studio equipment.

That’s not to say that the album doesn’t have some highlights.  On the opening track “Before Your Very Eyes…” Atoms For Peace has found a near perfect balance of live instruments and high-end electronic production.  Their lead single “Default” is mixed masterfully and adjusts our pallet for the unique album to come.  But most tracks, as interesting as they are, miss the mark by a small margin.  The eerie title track had a ton of potential but is way too busy, with ambiance and the drum loop covering up much of the actual melody, making you yearn for the striped down version used on the band’s website.   Amok produced a few good tracks and a few duds, making it an extremely average experience overall.