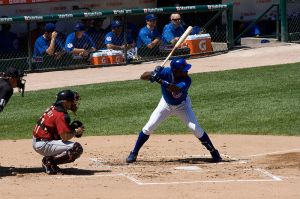 The Cubs are an interesting team because they have a pretty even spread of veteran and young players. The infield has two key pieces for the future, star shortstop Starlin Castro, who’s known around the league as the guy in the videos who picks grass from the outfield during pitches, and lesser-known first baseman Anthony Rizzo.  Both are great offensive weapons and Castro has slowly shown improvements on defense.  I don’t know what to expect from the outfield.  David DeJesus and Nate Schierholtz are very boring players but should be effective enough, and Alfonso Soriano finally put up some nice all around numbers in 2012, but still has yet to live up to the 19 million dollars he’s owed this season.

The Cubs’ bullpen is by far their biggest weakness.  Nobody knows whether Carlos Marmol will show up to be the shut down closer he was in 2010, or the ineffective one in 2011.  Last season he fell somewhere in the middle, blowing only 3 saves but giving up a lot of runs and experiencing a decline in strikeout rate.

Starting pitching has been a bit unpredictable the past few years and the Cubs traded away Ryan Dempster and Paul Maholm at the deadline, but the staff should still be improved this season.  Jeff Samardzija became the team’s true ace after Matt Garza had some health concerns.  Garza has been a huge disappointment for the team so far, but will be looking to redeem himself atop the rotation.  Career traveler Edwin Jackson may have finally found himself a permanent home in Chicago, a team that needed a reliable veteran starter behind Garza.