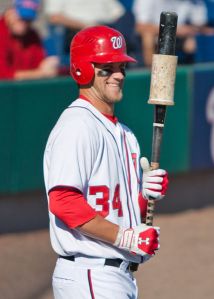 The Washington Nationals owned last season’s best record and have just gotten better during the offseason.  2013 will mark the first full year of Bryce Harper and the first season of Stephan Strasburg without an innings cap.  Everyone’s already experienced what Strasburg brings to every start, but Harper’s potential seems endless.  It’s weird to think of the rookie of the year as a breakout candidate, but I feel that as impressive as he was in 2012, he could double his production across the board.  Pitcher Gio Gonzalez will try to repeat his 2012 success after he was accused of taking steroids in the offseason.

The team’s three offseason losses were Michael Morse,  Edwin Jackson, and Sean Burnett.  Morse missed the first half of 2012 with injury and the Nationals were able to cope without him.  They shouldn’t have a problem replacing him this season either.  Dan Haren will be able to fill Jackson’s shoes easily. They also replaced Burnett with Raphael Soriano who’s much more experienced and established, and makes their bullpen the most effective in baseball.  They have three players that can be closers for any team in the league.

None of the Nationals’ hitters are too dominating alone but the majority of them are extremely consistent.  Adam LaRoche and Jayson Werth (once you get passed his contract) are veterans that contribute a great deal on offense and defense.  Ryan Zimmerman is still only 28 and had fought through injuries to have a stellar 2nd half of 2012.  The rest of the team is made up of young talent, and the Nationals should be an almost unstoppable force for seasons to come.