My final top four of the regular season is Clemson, Alabama, Michigan State, and Stanford, after each team won their conference championship game.

Oklahoma is the odd man out, after not playing this week and only playing 12 games this year, compared to 13 by the four teams ahead of them. Their average per game is actually higher than Stanford’s, but Oklahoma can’t get credit for a game they didn’t play now that we’re at the end of the season. I’m guessing the Playoff Committee will put Oklahoma in, but going by my metric, I’d leave them out.

After the championship games this weekend, the only non-bowl game left is Army/Navy. 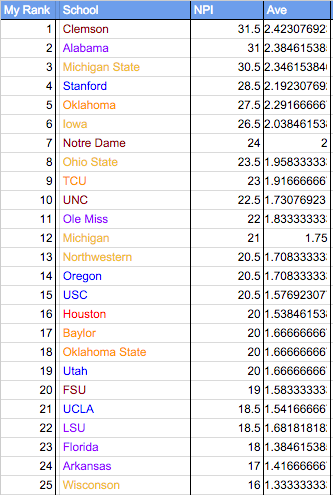