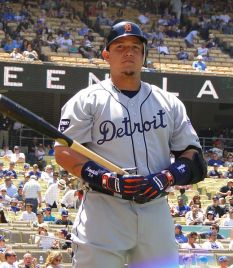 It’s hard to know where to start here.  Miguel Cabrera just won the American League MVP award and became the first player in the last 45 years to win Baseball’s Triple Crown, leading the league with 44 home runs, 139 runs batted in, and a .330 average.  Then there’s 2011’s MVP and CY Young winner Justin Verlander, who is easily the best pitcher in baseball.  And finally, last season’s big free agent signing Prince Fielder, who contributed his expected power and increased his batting average by 20 points on his way to win the Sliver Slugger award in Detroit.

The Detroit Tigers are in a good position here as reining AL Champions.  They’ve added an explosive bat in Victor Martinez who’s returning after missing the entire 2012 season.  Max Scherzer, who was known for being inconsistent, had his best statistical season giving the Tigers the two leading strike out pitchers in the league.  They’ve also replaced Delmon Young with the ageless Torii Hunter, who is an elite defensive weapon and a more consistent hitter than young.

The only thing that’s concerning is that the Tigers only had 88 wins last season, making them the team with the worst winning percentage to make the playoffs.  Anibal Sanchez and Doug Fister are extremely over rated starting pitchers, and the team has huge concerns at closer.  Last season Jose Valverde was unusable, and they did nothing to replace him in the offseason.  Even with their explosive offense, there will be times this team struggles to win.  I think their experience will push them into the playoffs, where they thrive, but like last season their record might not be too impressive.